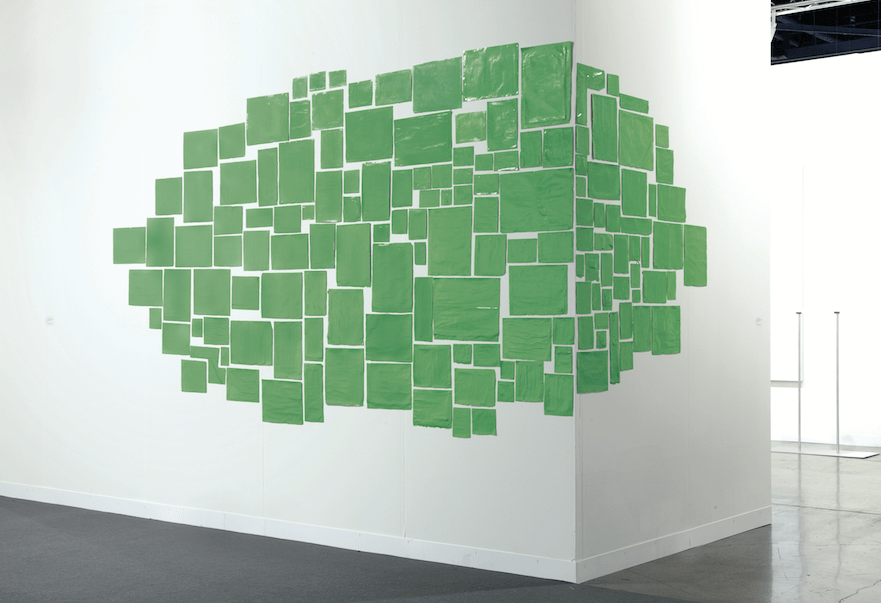 Blind self-portrait walking backwards until I hit my double humming to my ear “destroy, destroy!”, 2013
Acrylic paint on paper, 148 elements

Abraham Cruzvillegas (b. 1968) is one of the most important conceptual artists of his generation to come out of the vibrant art scene in Mexico. Over the past 10 years, Cruzvillegas has developed a riveting body of work that investigates what he calls “self-construction.” This term is a philosophical concept Cruzvillegas uses to describe his improvised method of building things.

Inspired by the harsh landscape and living conditions of his childhood neighborhood in Mexico City, Abraham Cruzvillegas assembles sculptures and installations from found objects and disparate materials. His works are often united by an identifiable formal sensibility, whose predominantly found-object or poor-material aesthetic influence of Robert Rauschenberg and Gabriel Orozco. Expanding on the intellectual investigation of his own paradoxical aesthetic concepts of destruction, he likens his works to self-portraits of contradictory elements and explores the effects of improvisation, transformation and decay on his materials and work. Throughout the use of discarded materials and objects, the artist reveals the deep connection between his identity, and his artistic practice: “Sometimes, I just play with the materials, finding combinations, taking whatever is at hand […] things, they speak, [and] I try to find a balance among them”.[1]

Abraham Cruzvillegas’s large wall piece titled Blind self-portrait walking backwards until I hit my double humming to my ear “destroy, destroy!” made in 2013, consists of 148 pieces of ephemera pinned to the wall: things such as newspapers, tickets, and envelopes, their backs painted green (you can lift them up and see what’s on the other side). The full shape is harmonious, leaving 2-3 centimeter between fragments according to the size of each paper; and at the same time it can be adapted to the size of the wall depending on the dimensions of the room or location of the art piece. This artwork recently acquired by Adrastus Collection depicts the artist’s own dwellings and sense of community in spite of the chaos and fragmentation of his life. 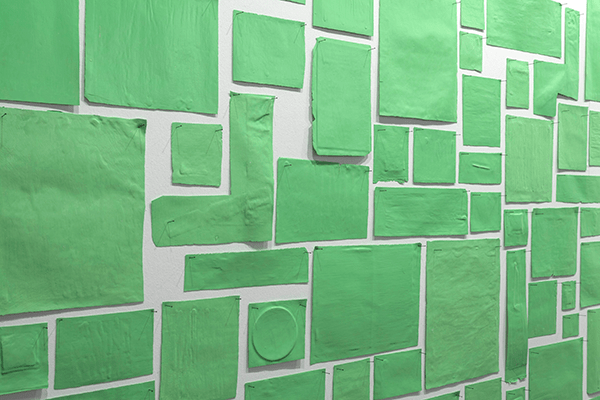 Close up of Blind self-portrait walking backwards until I hit my double humming to my ear “destroy, destroy!”, (2013)

In order to create this installation, Cruzvillegas coated large quantities of paper ephemera in unifying green paint and mounted them on a wall in a careful composition starting to pin up form the smallest to the biggest elements, from the center to the external sides of the artwork. Essentially, Blind self-portrait walking backwards until I hit my double humming to my ear “destroy, destroy!”(2013) is a mass of flyers, newspaper cuttings, postcards and travel tickets collected from around the world which are covered up with layers of paint, in this case green. Each is pinned to the wall by two thin pins. The intention is to obscure their true identity, giving the piece a sense of nothingness and joyless exclusion facing, as they are, the gallery wall. Viewed frontally, the irregular green tablets superimposed on white-painted brickwork recall the abstract paintings of Malevich or Rauschenberg. Viewed from the side, their dog-eared coroners reveal a myriad of colorful fragments of print. 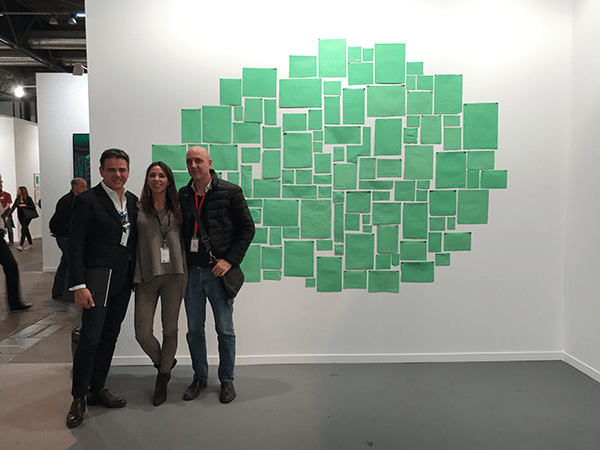 Adrastus Collection’s founders Javier and Lorena Pérez-Jácome with the collection’s curator Patrick Charpenel in front of the art piece by Cruzvillegas.