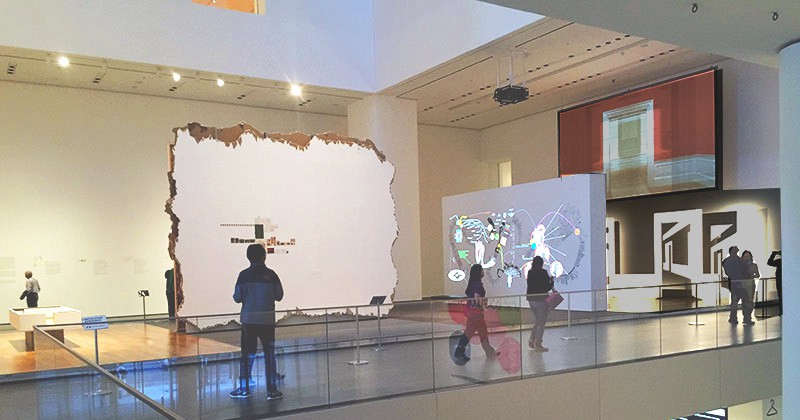 What will the super-sizing of the Arab art world bring? Walkthrough, Walid Raad’s 55-minute “performance” examines the recent emergence in the Arab world of new infrastructures for the visual arts and how economic and military conflicts affect artistic production. Different platforms stage the artist’s presentation, each with a floor from a distinct exhibition space, including contemporary art gallery, art fair, museum and biennale. The scenery comprises a hallucinatory collage projected over the backstage which lights are disrupted by a striking hanging sculpture (Views from outer to inner compartments, 2015). The complex setting will host approximately 60 sessions of Walid Raad’s hour-long lectures, to be imparted by the artist himself, between October 2015 and January 31st 2016, when the exhibition will close.

Fact and fiction fuse in order to tell the story of the Artists Pension Trust (APT), a real organization that has sought to develop a data-driven financial model for speculation in the art markets. Initially, the audience is confronted with a projected diagram that includes Alfred H. Barr’s famous sketch of the development of modern art, and locates the APT within the historical genealogy of the MoMA itself. While the purpose of this flowchart is to expose how art is currently being funded, producing a visual analogy between the world of art and finance, the underlying view in Walkthrough is that different power groups are “using” art investing as a way to clean their public image. From the increasingly conspiratorial narrative of art historians’ practice to museums as the ultimate machine of speculative frenzy, the Lebanese artist holds that such powerful lobbies distort the impartiality of art forums in favor of their benefactors’ interests. Interestingly enough (and perhaps inevitably), the argument is being made (or would have to be made) at one of the world’s foremost museums. Where else? 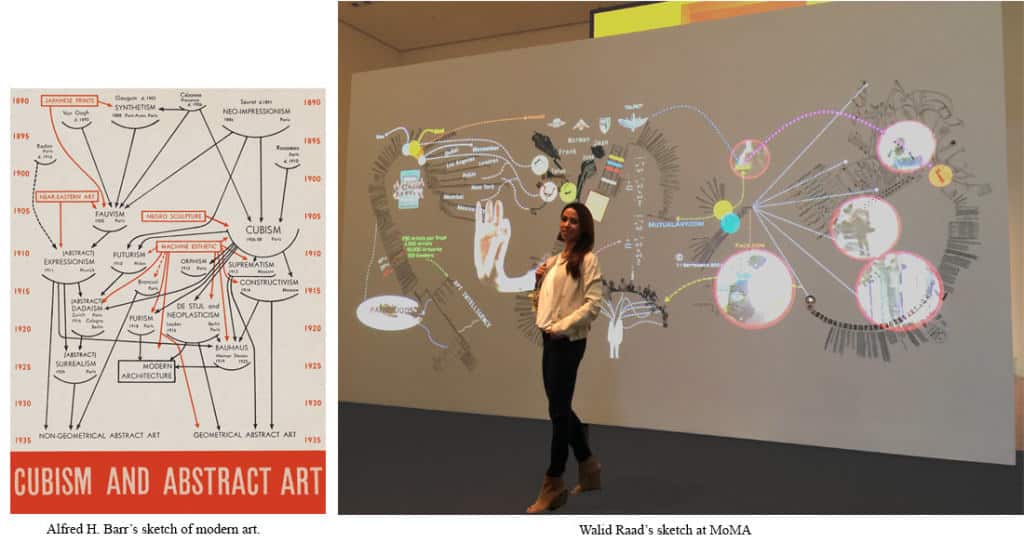 After initially highlighting the benefits to artists behind the APT, Raad goes to the extent of maintaining: “it could be dangerous for any Arab artist joining this fund, because Lebanon and Israel are still in a state of war.”[1] During his lecture, Raad underscores the continuing tensions, stating that his research has revealed that one of the APT’s founders served in an elite military intelligence unit of Israel’s Army. Specifically, Raad refers to Moti Schniberg -the same man who literally attempted to copyright “9/11 2001”- a few hours after the twin towers came down.[2] 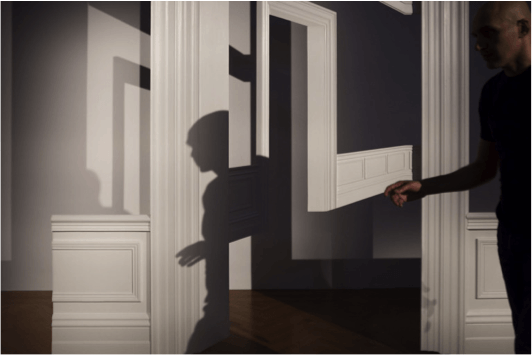 Views from outer to inner compartments, 2015

Moving forward into the performance, before a suspended sculpture of white door frames and a video projection of various empty gallery spaces, Raad embarks on a discussion about the proliferation of cultural organizations on Abu Dhabi’s Saadiyat Island, new Islamic art branches at the Guggenheim and the Louvre museums, and a new affiliate of the British Museum. Billions of petrodollars have been committed to the founding of Arab art institutions, as well as an extensive network of fairs, biennials and smaller institutions that have emerged in recent years. These museums promise to become a long-term platform for the 21st century Arab Art public. Raad considers that, however, while these institutions have received considerable amounts of money from the sheikhs of the United Arab Emirates, the latter intend to expand their collection of luxury amenities to distract media focus from their arguably politically repressive state.

While having been considered as somewhat errant, Raad’s interconnections unmask the political corruption and violence behind some of the major financiers of the art world. His journalistic interest is strongly documented throughout the rest of the exhibition. This retrospective had its origins in 2007, when he began to study the emergence of new art museums, galleries, schools and cultural foundations in cities such as Abu Dhabi, Beirut, Cairo, Doha, Istanbul, Ramallah and Sharjah, among others[3]. Intrigued by the increasing visibility of the makers, sponsors, consumers and historians of “Arab Art”, and moreso by the acceleration in the development of new infrastructures for the visual arts in the Arabian Gulf, Raad’s exhibition and performance unveil complex conspirational motives prompting emirs, ministers, sheikhs and other powerful people to invest massively in the arts. The documentary perspective has become an obligated visit at MoMA.